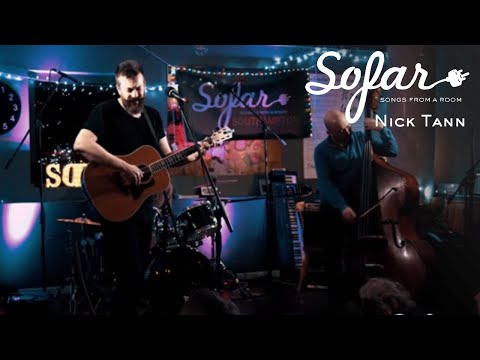 Nick Tann has worn many musical hats, and occasionally actual hats as well.  He has wielded all manner of instruments, but is best recognised in the guise of solo, acoustic guitar slinging, jazz tinged, folk-pop performer. And it is that more familiar sound which forms the basis of the new look and sound of Nick Tann and his new band. The “new” Nick Tann is a numerically fluid affair but is normally a triptych of Nick Tann on guitars and vocals, Bastien Terraz on double bass and Guy Siviour on drums/percussion. However some shows may contain fewer players or perhaps expand to include occasional itinerant musicians collected along the way. Life may indeed be like a box of chocolates.

The calling card for this new format is the recent release Authentic, an album which takes Nick’s impressive song crafting and explores the space around it through deft and dexterous additional musical textures and hues.

At the heart of the sound is the familiar balladry, emotionally driven personal narratives and rich vocal tones from solo days but now there is some wonderful musical augmentation. A chilled yet structurally robust British folk take on Americana heartland traditions and whilst the familiar building blocks of Jazz, blues and country all play their part it is a wholly new sonic architecture that is the end result.

Nick and his band made up of Bastien Terraz on double bass and Guy Siviour on drums are now looking to become a familiar face across the landscape, but like any hard working band you will also find them bringing their wonderful creations to the usual circuit of pub back rooms, live sessions, festivals and house shows. Three is indeed a magic number.

2018 finds the band playing their first Main stage at a major festival appearing at Wickham festival in Hampshire  on Friday the 3rd August. They also close the festival on the Quay West Stage on Sunday 5th August. That coupled with a return to the Ventnor Fringe Festival and Lion Festival in Haslemere, their bookings roster is filling up nicely.

Born in Paddington, London, Nick’s early life was filled with music. “I was singing hymns and harmonising with my mum from as early as I can remember.  I was interested in the guitar from the age of two and picked up my first instrument at the age of three.  At 13 I started playing bass guitar and then I was hooked for life.”

After playing bass with a succession of bands on the London circuit throughout the 1990s, Nick emigrated to Australia for a different lifestyle and a break from the UK music scene.   Returning to London a few years later Nick immediately hooked up with old musician friends Dave Miles and Paul Harris and started writing songs and playing guitar again – this time the acoustic. This sparked a creative period, and a busy gigging schedule for the trio – and later Nick’s nine-piece funk-soul band People – leading to renewed fame on the London circuit.

Since then, Nick’s career has gone from strength to strength and since his move to Hampshire in 2005 he has become one of the standout singer songwriters in the crowded music scene of the south coast.  He turned professional in 2012 when he obtained his beloved Taylor 810 6-string guitar which he is rarely without.

Likened to a mixture of John Mayer and Counting Crows with generous helpings of John Martyn and Elvis Costello with a Jeff Buckley chaser, Nick’s music is unexpected – it can be powerful and edgy but also soulful and tender.

Nick’s fan-funded album ‘3 AM’ landed in 2014 to great critical acclaim. Through it, Nick has enjoyed airplay and interviews on BBC6 Music, BBC Introducing The South and BBC London as well as radio stations across Europe and the USA. Tom Robinson is a fan of Nick’s music and recently said “He’s just sooo good!” after playing his favourite track ‘Don’t’ two-weeks running on his BBC6 Music show.

His stint with Celtic rockers COAST in 2013 as their bass player was a welcome digression and gave Nick a taste for the fantastic festival scene in Germany, Norway and Denmark. He can also be heard playing double bass on Glastonbury Festival’s favourite folk star Lucy Kitchen’s debut album ‘Waking’.

Late in 2016 he formed a band with fellow Hampshire musician Jazz double bass player Bastien Terraz and have just released an the album “Authentic” available to buy from this site as well as the usual digital outlets. The recent addition of Guy Siviour on drums is making a huge impact on the sound and feel of the ensemble and signs are good that the addition of these other talented and experienced musicians are the start of something quite wonderful.

As well as all this Nick finds time to support and promote new music from all over the globe through his quietly popular podcast ‘Is This Thing On’.  which this year 2018 celebrates a magnificent ten years of existence!